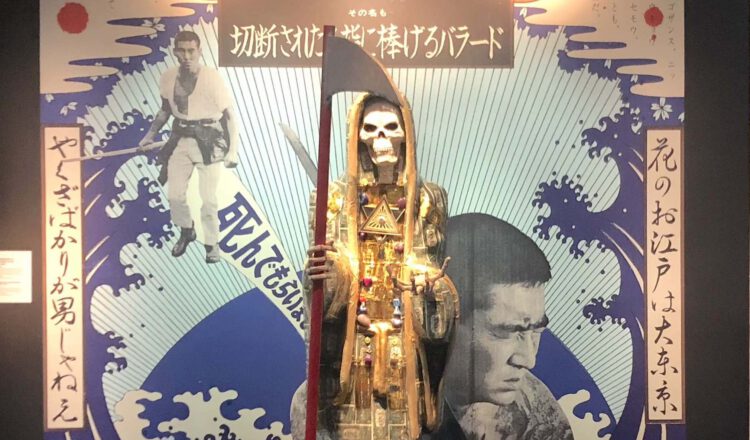 The current security crisis and criminal violence in Mexico go hand in hand with the rise of new forms of religious belief and spiritual protection. The folk saint Santa Muerte and Jesús Malverde are widely popular, and are believed to be protectors among others, of the underworld and street crime.

The temporary exhibition ‘Most Wanted’ at Museum Volkenkunde started last April and presents materials the museum has collected on the expressions of organized crime in popular culture. Cases from Japan, Italy and Brazil are part of the exhibition. I was invited to collaborate with my research and present the clip ‘Santa Muerte: Spaces and Celebrations’, with original footage from fieldwork conducted in Santa Muerte shrines and celebrations in different cities in Mexico and the United States.

In addition, I selected two images specially for this exhibition, that were transported from Mexico. The images are now part of the permanent collection of the museum Volkenkunde and are on exhibit. The first is an acrylic statute of 1.6 m representing the skeleton saint Santa Muerte. The image Santa Muerte ‘Del dólar’ is believed to bring fortune and good luck for people dealing with Mexico/USA issues, like migration, bi-national families, trade, and trafficking.

The second image is a statuette of Jesús Malverde, the folk saint from Sinaloa in the North of Mexico. The statuette is made of acrylic. Malverde is sat on a throne made with USA dollars and cannabis leaves. This saint is well known as a protector of mariguana traffickers who run across the border.

The video and images can be seen in the exhibition ‘Most Wanted’, that runs until 1 March 2020 at the Museum Volkenkunde, in the city of Leiden.